The Word that Creates the World

Inicio > Sin categorizar  > The Word that Creates the World 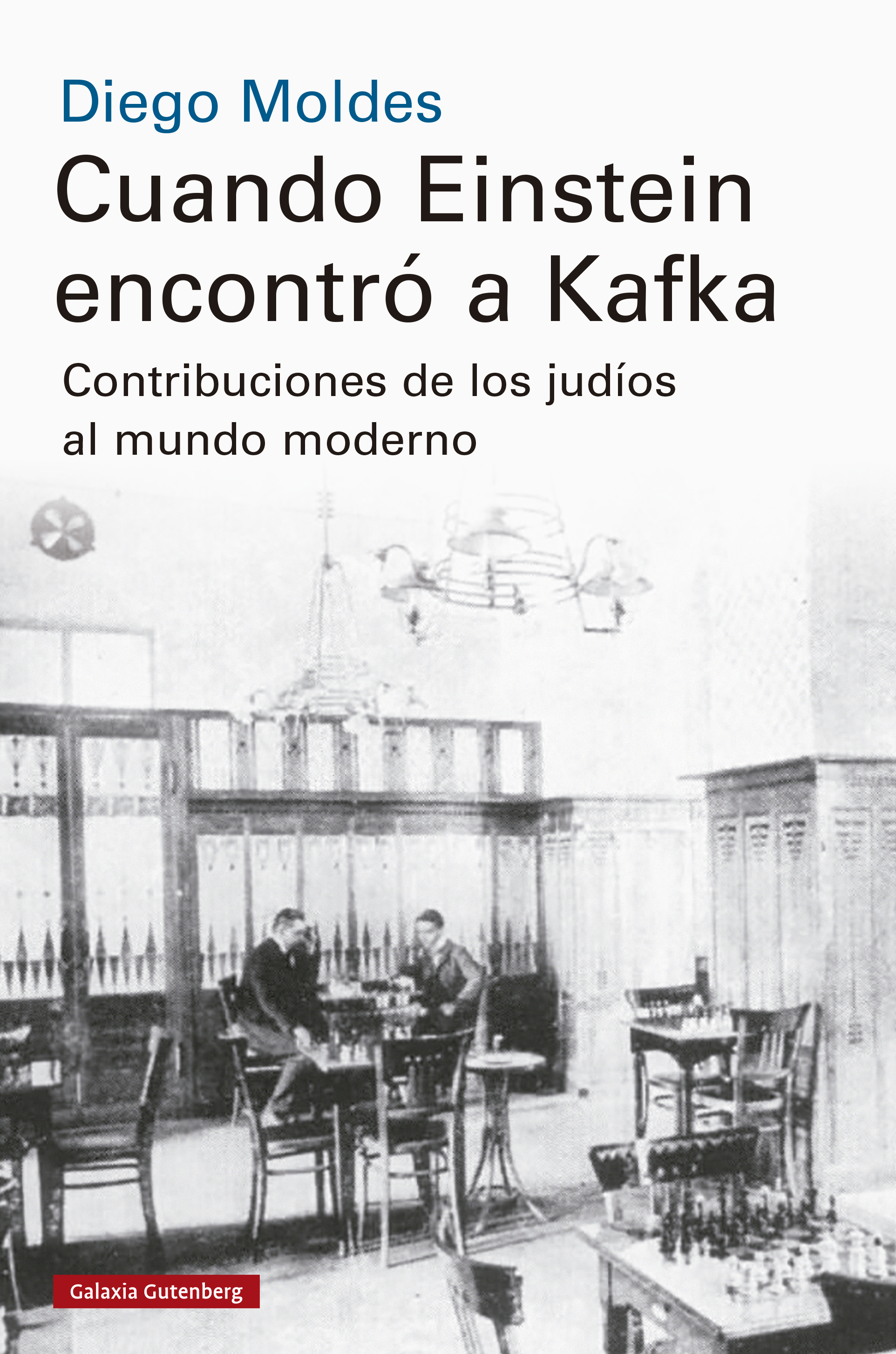 14 Jul The Word that Creates the World

For me, a disciple of Sigmund Freud and Emmanuel Levinas, the promised land knows no borders or homeland. It needs neither walls nor fences to assert its sovereignty. Within humanity, within each of our individual consciousnesses, the world is woven with fantasies and scenes that have become embedded in our awareness with a significance that definitively marks and inhabits us. Being Jewish is perhaps part of this capacity for amazement, this thrill when the culture is made present in its most intense expression, when a book—always a book, of course—brings us face to face with ourselves and illuminates certain corners that had been hidden in the dark.

Today I’m discussing Cuando Einstein encontró a Kafka, by Diego Moldes (700 pages, Galaxia Gutenberg). It is an absolutely exceptional book, not just for its many masterful pages, but for its prolific historical undertaking and its detailed exploration of Jewish culture to a level I’ve never before seen, with a daunting level of erudition. I’d say that Diego Moldes is an officiant or a celebrant of Jewish culture, a fact that does not prevent him from being a historian with rigorous intellectual honesty (though he doesn’t hide it behind a veil of assumed objectivity or capricious subjectivism). He has a profound respect for his chosen theme and the curricula of his subjects (in a cyclopean effort to encompass a huge amount of information and documentation) and, above all, I repeat, he shows a love of the culture that has no time for labels or schemas, has not a trace of puerile anecdotes or frivolous gossip, but rather faces head on that incisive form of knowledge that is demonstrating what one knows and seeking those who can help with what one doesn’t know. The culture, the noble culture, in short, that Diego Moldes pays tribute to. I cannot help but be reminded of my friend Mauricio Weisenthal’s bon mot in response to a question about his Jewish heritage: “I’m related to all the characters in the Old Testament except Charlton Heston.”

You may know that the word “culture” comes from a Latin root that means “cultivate, demonstrate, care for, preserve”” (which is exactly what Moldes does) and means both cultivation of the earth and the cult of heaven. The Jewish project has always been to connect one of those aspects to the other: care, veneration, reciprocity. And this applies to every Jew. The word created the world and helps to mold (does Moldes come from “to mold”?) people’s identities. The secret of the Jewish culture is its oneness, however many forms it may take, its diversity and reflective, re-collected richness, re-trammeled through the Book, centenarian books, whether they are called Tanaj, Talmud, or Torah, or even more earthly authors such as Primo Levi, Arthur Schnitzler, Hugo von Hofmannsthal, Walter Benjamin, Patrik Modiano, Vasily Grossman or Amos Oz. In all these (and many more, of course, that Moldes covers in detail) the word is like a god, not only because of what is told or done, but also what is written, what is revealed, what is created, what is unprecedented in its contribution, in an infinite spiral that turns life and tradition into art and creation, and in that—permit me the tortured metaphor—we Jews are Kafka’s pen (not long ago I left one at his tomb in the cemetery in Prague in case he needed it) or Chagall’s paintbrush, Proust’s Madeleine, or Einstein’s violin. Moldes does not fail to introduce us to other aspects of the culture, from cinematography to computers and the Internet, from business to rock music, from sports to comics. Everything inhabits this book, which offers rousing reading as well as references and research. In Moldes’ thirst for information and culture—always strict, always exemplary—we could say that “no Jew is safe” (as a friend said to me). When, in the fateful twilight in Berlin and Munich Hitler burned Kafka, Einstein, Marx, Herzl, Wasserman, and even the Old Testament, when that blaze carried off the best thoughts that humanity had ever conceived, the fire marked an inflection point in the culture. Perhaps—As Amitai Etzioni says—we all have a latent Eichmann inside us but faced with that horror what comes through is the law, the gut, the vociferous condemnation of the assassination of the word, the humiliation of the Book. The Book or book that continues to be the portable homeland of the Jews. One might not have a deep religious culture or adequate spiritual instruction, not attend synagogue regularly or not have been raised in the spirit of the religion and still possess a transcendent relationship with the Law that is born of the Book (or book), that enigmatic circumstance that makes us light the fire every morning, as necessary for the believer as for the atheist or the agnostic.

Because what is essential is to have the ultimate questions ever awake, the metaphysical conundrums that forever propel us on to know more. And to know more is to ask more, because it is in this need to know that we are all similar. I am always moved when I recall the moment when Don Quixote dies, putting aside his earlier illusions, and Sancho, alone before him says, “and what do I do now?” Because we can only access knowledge in a fruitful way if Don Quixote does not leave Sancho alone. I think that all Jews, in one way or another, reclaim their roots in their adopted place and the sign it consists of. Perhaps it has something to do with this well-known thought from Pepe Bergamín: “If I had been born an object, I would be objective, but since I was born a subject, I am subjective.” Moldes is subjective, but he has such a deep sense of the objective that his book is the pure wisdom of a being who has decided to remain neutral against all obstacles.

We Jews demand identity from a culture that inhabits us transparently and opaquely. Because we are the descendants of prophets but also of the ones those prophets cursed. That is why culture is no guarantee of humanity: there is the Germany of Aushwitz-Birkenau and the Soviet gulags or the fateful Middle East, there is Hitler and Stalin and their surrogates who, when they hear the word “culture” (in the sense that Moldes uses it) take out their revolvers and fire. Reading this book did not obsess me because it draws valid conclusions (although I cannot deny that Moldes’ conclusions chapter brought tears to my eyes) but because it brought me closer to an approach to questions that is never entirely where it is. 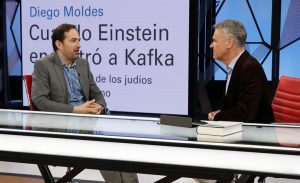 Moldes knows this very well. What can be said of so many universally-influential Jews is that they inserted themselves into their host societies and ended up nurturing the Western tradition and interacting with other forces of similar intensity. “Judaism is messianic,” writes Moldes, “it has a historical purpose, and this prevents it from raising individuals who dedicate themselves to contemplative life, to daydreams or the dolce far niente.” And so it is. Jews are eternal students who must be dogged in their search because they study the sources, they interpret them and, once they have finalized, the interpretation they interpret them again, which is to say it is always an interpretation of an interpretation, a permanent exercise in resignification, it is the search for wisdom which is none other than the thirst for culture. An Argentine philosopher, Darío Sztajnszrajber, states in a report: “to me Jewish philosophy is knowledge that is re-created all the time from the various re-readings that are done of other previous Jewish knowledge.

There is no canon of Jewish knowledge for me: the Talmud is still open. They write all the time about the nine interpretations of the Jews throughout history. And the question of the limit that does or does not apply to Jewish knowledge, it seems to me it is an essential part of it as well. That is to say, there is no limit, rather discussing the limit is part of Jewish knowledge.” That is why I, Arnoldo Liberman, think that Jewish religiousness (not religion) has more to do with spontaneity and inspiration than with religious guidelines, because religiousness is an entrance but not an exit, it has more to do with an opening and not with norms. In this sense, and as Edmond Jabés would say, we are Jews in the desert. I have always said—like many friends of mine—that I feel closer to an open Christian than to a closed Jew. And of course, that is from my perspective, that of an open Jew. That is why it’s good to read Diego Moldes and know about this eternal destiny of the Book (or the book, from our creative capacity) that has marked our history, where reason and imagination have mated to create a sense of life. We are all aware that this mating was not easy, and many times they felt discouraged, the former unable to understand an unimaginable evil, and the latter not able to imagine an incomprehensible evil.

But easy or not, this lover of the word, this compiler of strict justice, this diver for conundrums that is Diego Moldes enriches us with his book and with the messianic meaning of his book (I know that Moldes is secular—me too—but we are talking about transcendence in that same sense), that is, the consciousness that the concepts of humanity and universal history are insufficient to give meaning to existence, at least individual meaning, and that is why we need to aim for that Beyond that Gustav Mahler talks about in his quavers. That Beyond that, in its multiple meanings, includes the hunger for eternity that beings like Moldes possess. And that is why he has given us this magnificent book, which I warmly recommend.

Arnoldo Liberman (Concepción del Uruguay, Entre Ríos, Argentina, 1933) is a psychoanalyst, musicologist, and writer. Since 1959, Liberman has been the author of 30 books and multiple articles.